Phenotyping of immune cells in blood

Immune system is the essential part of the body to resist foreign invasion and clear transformed cells and tissue. It concerns the health and survival of life and have always been the focus and hot spot biological and medical research. In the process of pathophysiology, immune cells arrive at whole body from lymphoid organs through vascular system and blood circulation. Flow cytometric analysis of immune cell in blood is one of the most used methods to examine the immune state of body in biological and medical research. Blood cells consist of mainly erythrocytes (red blood cells) and leukocytes (white blood cells). Immune cells refer to the leukocytes. Almost all of the immune responses in body is accomplished by the cooperation of all groups of leukocytes. As a result, they are the main subject of all kinds of research models, such as infection, inflammation, autoimmune diseases and transplantation. 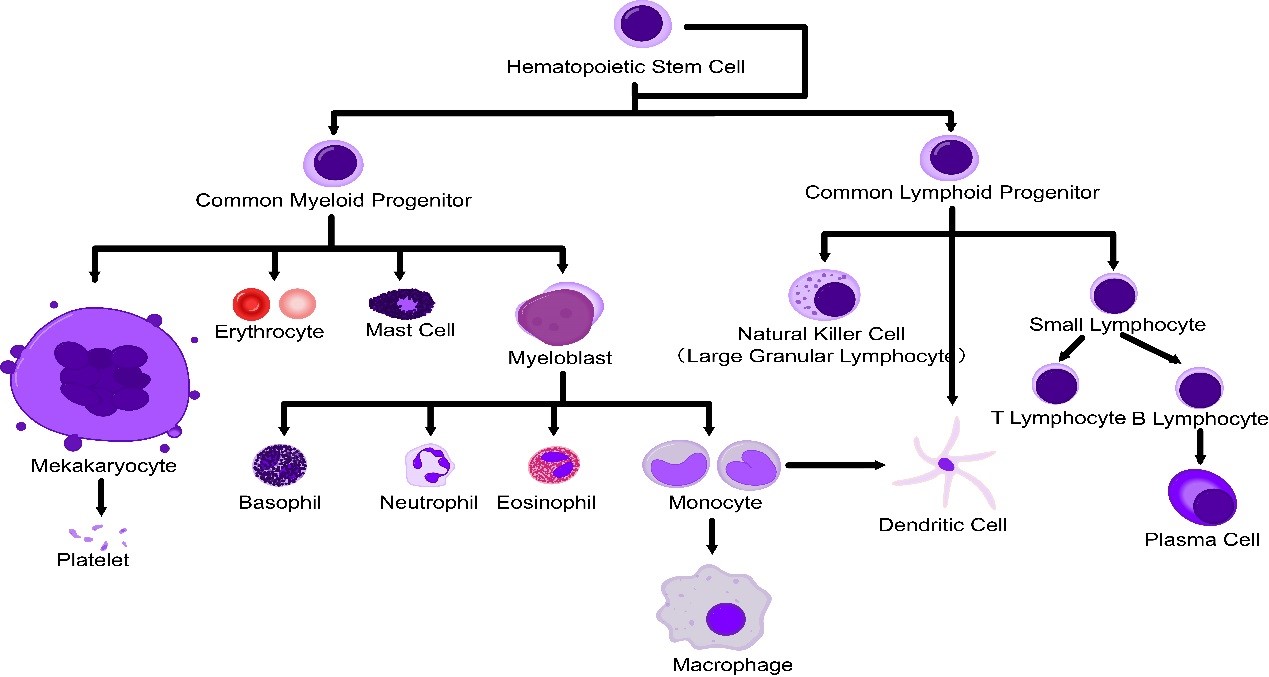 CLP differentiated mainly into different lymphocyte populations, of which B lymphocytes, T lymphocytes and natural killer (NK) cells are the most common. In the term of abundance, B lymphocytes and T lymphocytes have the absolute advantage. They are the main effectors of the acquired immunity. Both formed in the bone marrow, T cells move to thymus to mature and are circulated to lymphoid organs such as spleen and lymph nodes while B cells go to peripheral lymphoid organs directly after maturation in bone marrow. That is where the name B and T come from. NK cells are much scarcer, however, they have strong cytotoxicity and play important roles in innate immunity.

NK cells are also called large granular lymphocytes due to that larger cell diameter and the massive granular vesicles in the cytoplasm inside which there are immune effective molecules of cytotoxicity, such as Granzyme B. NK cells, similar to CTL, mainly recognize and kill transformed or infected self-cells. In contrast to CTL, NK cells can recognize cells that lost MHC I. Surface markers of human and murine NK cells have much difference, so the antibodies used to identify human and murine NK cells are quite different. CD56 (Cat#E-AB-F1006) and CD16 (Cat#E-AB-F1005) are used to identify human blood NK cells. CD49b (Cat#E-AB-F0988) is the common surface marker of murine NK cells while specifically for C57BL/6, the most used mouse strain in immunological studies, NK1.1 (CD161c, Cat#E-AB-F0987) is a surface marker of high specificity. In combination with CD3 (Cat#E-AB-F1013), murine NK cells can be identified as CD3-NK1.1+or CD3-CD49b+.

Myeloid cells of blood consist ofmonocytes/macrophages, dendritic cell and granulocytes. Monocytes are immature precursor cells. Once retained in tissue from blood, monocytes differentiate into macrophages or dendritic cells, both belonging to the so-called professional antigen-presenting cells (APC). Granulocytes consist of neutrophils, eosinophils and basophils. Neutrophils make up the majority of blood leukocytes while eosinophils and basophils account for less than 1% of leukocytes.

Blood monocytes is responsive to damage and inflammation in the body, usually reaching the lesion within 8~12 hours. In murine blood, monocytes can be identified with CD11b (Cat#E-AB-F1081) and CD115 (Cat#E-AB-F1107) as double positive while human blood, monocytes express high level of CD14 (Cat#E-AB-F1084) and low level of CD16 (Cat#E-AB-F1005). Human monocytes upregulation the expression of CD16 and downregulation CD14 when differentiated into macrophages. Murine macrophages express high level of F4/80 (Cat#E-AB-F0995) and can be identified as CD11b+F4/80+. Macrophages, as the name indicated, can clear infected, transformed, apoptotic and necrotic cells by phagocytosis. Known as the scavenger of the body, macrophages have such strong digestion ability that antigens are over-digested for peptide presenting, resulting into limited antigen-presenting ability. However, the other descendant of monocyte, dendritic cells, have modest digestion ability and high abundance of MHC II (human, HLA-DR, Cat#E-AB-F1111; mouse, H-2, Cat#E-AB-F0990) and co-stimulatory molecules. Dendritic cells are the most potent APC in body. They can digest antigens into peptides of appropriate lengths for MHC II. With the help of co-stimulatory molecules, dendritic cell can strongly activate T cells through peptide-MHC II complexes, inducing the proliferation and cytokine secretion of T cells. Besides high level of MHC II, CD11c (human, Cat#E-AB-F1009; mouse, Cat#E-AB-F0991) is another surface marker of high expression level on dendritic cells. In flow cytometry, dendritic cells can be identified as CD11chiMHC II+.

In granulocytes, the most studied population is neutrophil which involves into all kinds of infection and inflammation. Neutrophils, also called microphage, have a typical morphology different with other leukocytes. They have massive vesicles inside and multilobed nuclei. Therefore, neutrophils usually have much higher SSC signals than other cells. Inside the vesicles of neutrophils, multiple cytotoxic proteins, such as myeloperoxidase, lysozyme, defensin and bactericidal permeation enhancing protein, are stored for resisting the invasion of bacteria. In flow cytometry, human neutrophils can be identified as CD66+while murine neutrophils can be identified as Ly-6G+(Cat#E-AB-F1108).

The above is just a rough phenotyping of blood immune cells. In fact, with the deepening of understanding and the continuous improvement of detection technology, scientists have found that all the immune cells mentioned above can be further subdivided into more sub-populations based on function and surface markers. We will continue to publish a series of articles to discuss the characteristics and surface markers of different sub-populations of different immune cells, so stay tuned!