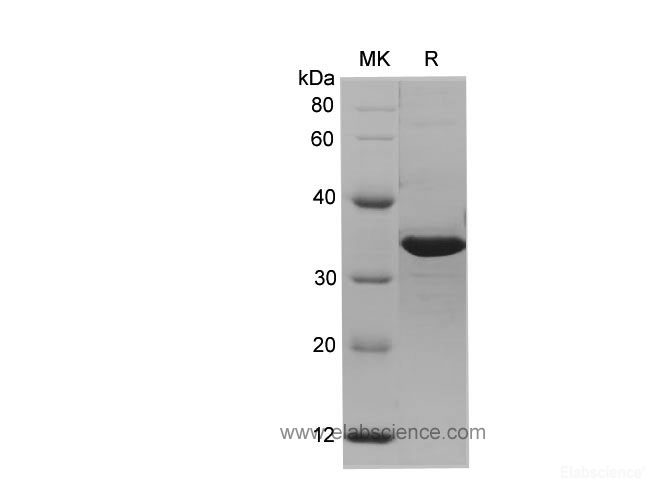 Non-receptor protein tyrosine kinase which is activated following engagement of many different classes of cellular receptors including immune response receptors, integrins and other adhesion receptors, receptor protein tyrosine kinases, G protein-coupled receptors as well as cytokine receptors. Participates in signaling pathways that control a diverse spectrum of biological activities including gene transcription, immune response, cell adhesion, cell cycle progression, apoptosis, migration, and transformation. Due to functional redundancy between members of the SRC kinase family, identification of the specific role of each SRC kinase is very difficult. SRC appears to be one of the primary kinases activated following engagement of receptors and plays a role in the activation of other protein tyrosine kinase (PTK) families. Receptor clustering or dimerization leads to recruitment of SRC to the receptor complexes where it phosphorylates the tyrosine residues within the receptor cytoplasmic domains. Plays an important role in the regulation of cytoskeletal organization through phosphorylation of specific substrates such as AFAP1. Phosphorylation of AFAP1 allows the SRC SH2 domain to bind AFAP1 and to localize to actin filaments. Cytoskeletal reorganization is also controlled through the phosphorylation of cortactin (CTTN) (Probable). When cells adhere via focal adhesions to the extracellular matrix, signals are transmitted by integrins into the cell resulting in tyrosine phosphorylation of a number of focal adhesion proteins, including PTK2/FAK1 and paxillin (PXN). In addition to phosphorylating focal adhesion proteins, SRC is also active at the sites of cell-cell contact adherens junctions and phosphorylates substrates such as beta-catenin (CTNNB1), delta-catenin (CTNND1), and plakoglobin (JUP). Another type of cell-cell junction, the gap junction, is also a target for SRC, which phosphorylates connexin-43 (GJA1). SRC is implicated in regulation of pre-mRNA-processing and phosphorylates RNA-binding proteins such as KHDRBS1 (Probable). Also plays a role in PDGF-mediated tyrosine phosphorylation of both STAT1 and STAT3, leading to increased DNA binding activity of these transcription factors (By similarity). Involved in the RAS pathway through phosphorylation of RASA1 and RASGRF1. Plays a role in EGF-mediated calcium-activated chloride channel activation. Required for epidermal growth factor receptor (EGFR) internalization through phosphorylation of clathrin heavy chain (CLTC and CLTCL1) at 'Tyr-1477'. Involved in beta-arrestin (ARRB1 and ARRB2) desensitization through phosphorylation and activation of GRK2, leading to beta-arrestin phosphorylation and internalization. Has a critical role in the stimulation of the CDK20/MAPK3 mitogen-activated protein kinase cascade by epidermal growth factor (Probable). Might be involved not only in mediating the transduction of mitogenic signals at the level of the plasma membrane but also in controlling progression through the cell cycle via interaction with regulatory proteins in the nucleus. Plays an important role in osteoclastic bone resorption in conjunction with PTK2B/PYK2. Both the formation of a SRC-PTK2B/PYK2 complex and SRC kinase activity are necessary for this function. Recruited to activated integrins by PTK2B/PYK2, thereby phosphorylating CBL, which in turn induces the activation and recruitment of phosphatidylinositol 3-kinase to the cell membrane in a signaling pathway that is critical for osteoclast function. Promotes energy production in osteoclasts by activating mitochondrial cytochrome C oxidase. Phosphorylates DDR2 on tyrosine residues, thereby promoting its subsequent autophosphorylation. Phosphorylates RUNX3 and COX2 on tyrosine residues, TNK2 on 'Tyr-284' and CBL on 'Tyr-731'. Enhances DDX58/RIG-I-elicited antiviral signaling . Phosphorylates PDPK1 at 'Tyr-9', 'Tyr-373' and 'Tyr-376'. Phosphorylates BCAR1 at 'Tyr-128'. Phosphorylates CBLC at multiple tyrosine residues, phosphorylation at 'Tyr-341' activates CBLC E3 activity. Involved in anchorage-independent cell growth. Required for podosome formation.