Definition: The sex hormones produced by the testes or ovaries, are basically the steroid hormones which plays important functions in human body. They are regarded as the controlling agents of different reproductive function and sexual development of a human body. They are known by different names in both male and female, in female they are called the Estrogens and progestins while in males they are called the Androgens.

In the past few decades, variety of research has been carried out on the steroid hormone action besides the fact that it’s barely more than four decades old. It has been experimentally proved by some fundamental research, conducted in late 1950s and 1960s, which the hormone-binding components commonly exist within nucleus of target tissues. Besides this, it has also been discussed that steroid hormones are actually responsible for regulating gene expression, rather than directly affecting the enzymatic activities. In the 1970s and 1980s, the understanding that steroid hormone receptors interact with the general transcription machinery and changes the chromatin structure was established and scientists are still working on it to elucidate different mechanisms. Furthermore, different discoveries in this field especially the rapid cellular responses to steroid hormones has made it possible  to identify the putative membrane-bound steroid receptors that serves without affecting the transcription of the gene [1]. 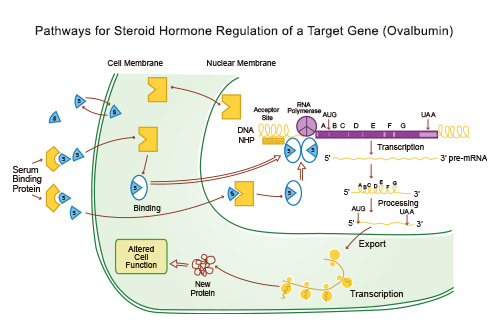 In the mid-1970s, the DNA sequencing and the recombinant DNA technologies were introduced that provided the ability to characterize, in depth, the steroid hormone receptors and their target genes. In the history of steroid hormones, the O’Malley’s lab was the pioneer in cloning in the 1977s and then the sequencing a target gene for steroid hormones, ovalbumin from chicken, in the 1978. Immediately after this the gene contains exons and introns were discovered by Pierre Chambon’s laboratory [2]. In 1985, the very first cloning of steroid hormone receptor (GR) was carried out as a result of collaboration between researcher labs namely, the Ronald Evans’, Michael Rosenfeld’s, and Brad Thompson’s lab. Soon after achieving the goals this research collaboration, in 1986 the receptors for estrogen currently known as ER-a, progesterone in 1987, and androgen 1988, were cloned, respectively. In humans, the ER-a gene exits on the chromosome 6, while the ER-b is present on the chromosome 14 [3]. Human PR localizes to chromosome 11, and the AR gene resides on the X chromosome, underscoring its necessity for female, as well as male, development. Cloning of PR also allowed for the understanding of how the A and B isoforms are derived from the same gene. Most interestingly, different species accomplish this feature by different means, with the chicken isoforms arising as a result of different translation start sites within the same transcript, and the human isoforms occurring via different transcription start sites [4].

A model emerges. In the 1980s and early 1990s, collaboration between different laboratories, a model for steroid receptor action at the level of the gene was developed. In 1983, two well-known laboratories, the Keith Yamamoto’s and Jan-Åke Gustaffson’s laboratories presented that a steroid hormone receptor (GR) binds DNA in a sequence-specific manner, for the first time in the history of steroid hormones. The receptor binding site, currently known as the steroid response element (SRE), is present upstream of steroid hormone-regulated promoters. Generally, SREs are 15-base pair consensus sequences consisting of two half sites, arranged as 6-base pair inverted repeats separated by a few random base pairs. The SREs for various receptors show significant sequence similarity, with SREs for GR, PR, and AR oftentimes being identical. In 1988, O’Malley’s laboratory was able to demonstrate that receptors bind the SREs cooperatively as dimers, with one receptor molecule at each half site [5]. In vitro experiments performed in the mid-1990s demonstrated that receptor binding to DNA is not hormone dependent [5].

Among different species the sex steroid hormones are considered responsible for regulating sexual characteristics and it is also produced in parts of the brain. In order to avoid confounding effects, many studies comparing the brains of trans- and cisgender people only include transgender subjects who have not yet begun treatments to bring levels of key sex hormones in line with those of their experienced genders. But some groups are specifically exploring the effects that these treatments might have on the brain. “There is an ongoing debate over whether hormonal administration in adult individuals changes the brain or not,” says Sven Müller, a psychologist at Ghent University in Belgium. If cross-sex hormone treatment can shape the adult brain, he notes, it’s important to find out “what happens to the brain, and what the implications for certain cognitive functions are.

Only a handful of studies have addressed the question of how these hormone treatments affect the brain. In one led by Antonio Guillamon of National Distance Education University in Madrid, researchers found that testosterone thickened the cortex of transgender men, while six months or more of estrogen and antiandrogen treatment led to a thinning of the cortex in transgender women [6]. A Dutch study similarly concluded that the overall brain volumes of transgender women dropped as a result of treatment, while those of transgender men increased, particularly in the hypothalamus. And last year, Karolinska Institute neuroscientist Ivanka Savic found that the brains of transgender men taking testosterone showed several changes, including increases in connectivity between the temporoparietal junction (involved in own-body perception) and other brain areas [7]. 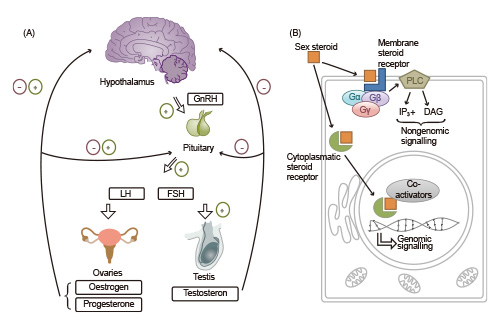 (B)Genomic and non-genomic actions of steroid hormones: a tentative interpretation

In another study published last year, of 18 transgender men and 17 transgender women who’d undergone at least two years of hormone therapy, and 57 cisgender controls of both sexes, Müller and colleagues found indications that such hormone treatments might even affect regions the brain that are not commonly considered to be among those sensitive to sex steroids specifically, the fusiform gyrus, involved in the recognition of faces and bodies, and the steroid cerebellum, known in part for its role in motor control [8]. Moreover, he notes, the changes in the cerebellum were linked to treatment duration. “People might need to broaden the scope as to where in the brain they are looking for effects of hormone treatments.”

In addition to shedding light on the brain networks controlling gender perception and dysphoria, the results of these studies will add to what’s known about the effects of hormone treatment on  transgender individuals, says Savic. “If we potentially provide treatment with sex hormones, which we should do for persons who need that, it is very important to know what sex hormones do to the brain.”

Research is still in progress to determine the effects of sex steroid hormones on the development of human brain and its normal functions. Although the sex steroid hormone receptors in the brain has been presented [9] while the functions of such hormones with in the brain have been elaborated, but still enough has to be done to fill in gaps in the current understandings of hormone system. Lack of appropriate research techniques currently available to assess the dynamics and interplay of these molecules in the living brain can be held responsible partly [10-11]. Some latest research techniques such as the non-invasive imaging could provide better opportunity in determining the function of sex steroid hormones and their receptors in the brain in health and disease. To quantify the effects of sex steroids on brain perfusion and metabolism, PET imaging can also be used. Treatment of hormones in different situations such as the menopause, hypogonadism and steroid abuse can gave much better results to determine the effect of steroid signaling on brain activity or relationship among the stress hormone levels and biological outcomes in humans. Research establishing correlations among hormone levels in plasma and the regional tracer uptake can tend to provide important information on the involvement of specific brain regions and regional connectivity. Application of animal models can bear fruitful because many experimental manipulations can be applied in animals but not in humans. Studies on PET related to the function of sex hormones in the brain have been deeply reviewed here and any short comings over here could be identified can be overcome. PET may prove to be a promising non-invasive technique that can be applied in both experimental animals and human subjects, which would facilitate the translation of interesting findings from studies in experimental animals into clinical trials in humans.

The followings are the committee on understanding the biology of sex and gender differences [12-13].

The followings are the involving indicators of sex hormones [14];