Sex hormones play a vital role in the human body, as it helps in development in sexual orgasms, development in muscularity, primary and secondary sexual characteristics that include both physical and behavioral traits [1-2]. Testosterone is a steroid hormone from the androgen group and is found in humans and other vertebrates. In humans and other mammals, testosterone is secreted primarily by the testicles of males and, to a lesser extent, the ovaries of females. Small amounts are also secreted by the adrenal glands. It is the principal male sex hormone and an anabolic steroid [3].

Testosteroneis a steroid from the androstane class containing a keto and hydroxylgroups at the three and seventeen positions respectively. It is biosynthesized in several steps from cholesterol and is converted in the liver to inactive metabolites. It exerts its action through binding to and activation of the androgen receptor [4]. In humans and most other vertebrates, testosterone is secreted primarily by the testicles of males and, to a lesser extent, the ovaries of females. On average, in adult males, levels of testosterone are about 7 to 8 times as great as in adult females. As the metabolism of testosterone in males is greater, the daily production is about 20 times greater in men. Females are also more sensitive to the hormone [5].

Like other steroid hormones, testosterone is derived from cholesterol [7]. The first step in the biosynthesis involves the oxidative cleavage of the side-chain of cholesterol by cholesterol side-chain cleavage enzyme (P450scc, CYP11A1), a mitochondrial cytochrome P450 oxidase with the loss of six carbon atoms to give pregnenolone. In the next step, two additional carbon atoms are removed by the CYP17A1 (17α-hydroxylase/17, 20-lyase) enzyme in the endoplasmic reticulum to yield a variety of C19 steroids [8]. In addition, the 3β-hydroxyl group is oxidized by 3β-hydroxysteroid dehydrogenase to produce androstenedione. In the final and rate limiting step, the C17 keto group androstenedione is reduced by 17β-hydroxysteroid dehydrogenase to yield testosterone.

The largest amounts of testosterone (>95%) are produced by the testes in men [9]. while the adrenal glands account for most of the remainder. Testosterone is also synthesized in far smaller total quantities in women by the adrenal glands, thecal cells of the ovaries, and, during pregnancy, by the placenta. In the testes, testosterone is produced by the Leydig cells [10].The male generative glands also contain Sertoli cells, which require testosterone for spermatogenesis. Like most hormones, testosterone is supplied to target tissues in the blood where much of it is transported bound to a specific plasma protein, sex hormone-binding globulin (SHBG)

In men, testosterone plays a key role in the development of male reproductive tissues such as the testis and prostate, as well as promoting secondary sexual characteristics such as increased muscle and bone mass, and the growth of body hair. In addition, testosterone is essential for health and well-being, and for the prevention of osteoporosis. Testosterone is necessary for normal sperm development. It activates genes in sertoli cells, which promote differentiation of spermatogonia [11].

2. Regulator of cognitive and physical energy.

4. Testosterone regulates the population of thromboxane A2 receptors on megakaryocytes and platelets and hence platelet aggregation in humans.

5. High androgen levels are associated with menstrual cycle irregularities in both clinical populations and healthy women.

As androgen affects the complete body (often by and huge males have larger hearts, lungs, liver, etc.), the brain is additionally full of this sexual differentiation; the protein aromatase converts androgen into estrogen that's chargeable for ontogenesis of the brain in male mice. In humans, ontogenesis of the fetal brain seems, by observation of gender preference in patients with non-inheritable diseases of steroid formation or steroid receptor perform, to be related to practical steroid receptors [12]. 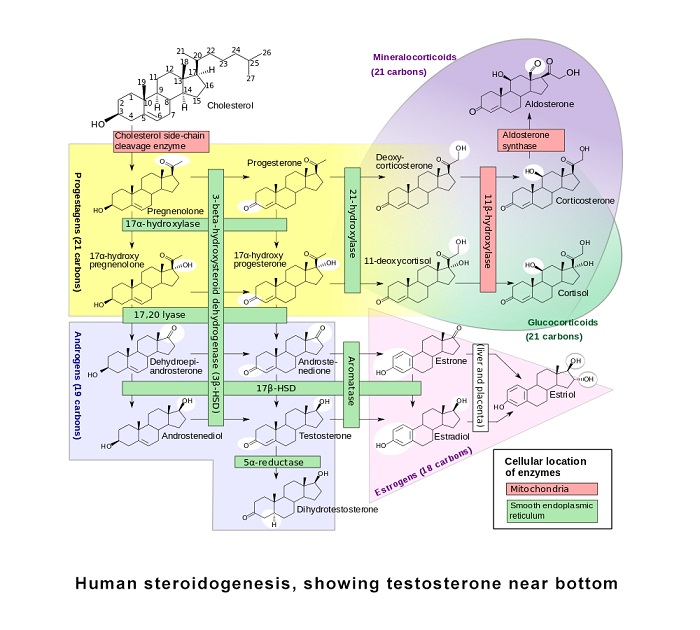 In this study daily variation of testosterone in the peripheral plasma of adult male has been observed [13]. At different time intervals of the day i.e. 08:00, 12:00, 16:00, 20:00 and 24:00, thirty ml of blood was taken in tubes from the arm vein of 20 healthy male subjects, ranging from 21-28 years of age. The blood was centrifuged, the plasma was removed, and 5 ml aliquots were immediately frozen. Also, a plasma pool was collected from 2 subjects and divided into 5 ml aliquots. This pool was used to test the reliability of the technique for testosterone estimation. Moreover, 10 ml duplicate plasma samples from 16 subjects were divided and testosterone was measured in each of the two 5 ml aliquots. In order to check the specificity of this method, 10 ml of plasma from 3 ovari ectomized-adrenalectomized women and from 5 normal women were also assayed for testosterone. The plasma samples were processed in the manner described by for the determination of testosterone, was double distilled before use, silica gel G was purified according to the method of Bush [14].The monochloro acetates were extracted with benzene instead of ethyl acetate. . This study was supported by National Institutes of Health Training Grant T4 CA 5000 and by NIH Research Grants.

This data clearly explains that the plasma testosterone levels in the adult human male undergo a diurnal variation. Higher levels of this hormone were found in the early morning hours as compared to the afternoon or evening [15].

2. Comparison of different methods for the measurement of serum testosterone in the aging male

Circulating testosterone (T) levels, mainly non-SHBG bound fractions, decline with advancing age. Free (FT) and bioavailable (BT) testosterone levels have been suggested to represent more reliably the bioactive hormone at the tissue level as compared to total testosterone (TT) levels. However, there is an ongoing controversy as to which T assay is most appropriate in defining T deficiency in the aging male. In a prospective observational study, TT, FT and BT levels were measured in 51 elderly men (55 to 70 years). TT levels were determined on two different days using 2 different assays. FT was calculated using TT, albumin and SHBG levels as well as measured directly by radioimmunoassay. The free androgen index (FAI) was calculated using the formula 100 TT/SHBG. BT was obtained by precipitation of SHBG-bound T with ammonium sulphate.Serum TT and the calculated FT fraction correlated well with each other and were superior in defining a group of elderly men with suspected androgen deficiency. In contrast, FT measured by direct RIA and BT reflected gonadal function poorly. Our data favor the repetitive use of TT when screening for androgen deficiency in elderly men [16].

3. Determination of testosterone esters and estradiol esters in bovine and porcine blood serum

Monitoring of steroid esters in blood serum is highly desirable in order to detect the possible illegal use of natural hormones as growth promoters. A method for the determination of testosterone propionate, testosterone benzoate, testosterone isocaproate, testosterone decanoate and estradiol benzoate in bovine and porcine blood serum was developed. The procedure consists of protein precipitation and removal of phospholipids using a HybridSPE®-Phospholipid column followed by clean-up on a hydrophilic modified styrene polymer SupelTM-Select HLB column and LC-MS/MS measurement. The method was validated according to Commission Decision 2002/657/EC. Decision limits for all analytes were observed in the range 5–30 pg ml–1. The method was shown to be robust for bovine and porcine serum analyses and can be applied for both screening and confirmatory determination in routine residue monitoring [17].

13C enriched Urinary steroids were found in Italian and Swiss populations as compared to other groups, reflecting higher consumption of C3 plants in these two countries. Importantly, detection criteria based on the difference in the carbon isotope ratio of androsterone and pregnanediol for each population were found to be well below the established threshold value for positive cases. The results obtained with the tested diet groups highlight the importance of adapting the criteria if one wishes to increase the sensitivity of exogenous testosterone detection. In addition, confirmatory tests might be rendered more efficiently by combining isotope ratio mass spectrometry with refined interpretation criteria for positivity and subject-based profiling of steroids [19].

Anabolic steroids are synthetically derived from testosterone, and are modified to enhance its anabolic actions (promotion of protein synthesis and muscle growth). They have numerous side effects, and are banned substances on the International Olympic Committee's list. Gas chromatography‐mass spectrometry allows identification and characterization of steroids and their metabolites in the urine but may not distinguish between pharmaceutical and natural testosterone. Indirect methods to detect doping include determination of the testosterone/epitestosterone glucuronide ratio with suitable cut‐off values. Direct evidence may be obtained with a method based on the determination of the carbon isotope ratio of the urinary steroids. This paper aims to give an overview of the use of anabolic‐androgenic steroids in sport and methods used in anti‐doping laboratories for their detection in urine, with special emphasis on doping with testosterone [20].

The need to understand testosterone testing is important as it is the primary male sex hormone and an anabolic steroid. Traditional testosterone testing methods are Radio Immune Assay (RIA) and Chemiluminescence Immuno Assay (CLIA). But these Assays have significant shortcomings: they tend to overestimate testosterone levels, are not standardized and accurate for low testosterone levels. In order to overcome the potential risk of these direct Assays, The Endocrine Society recommends the initial use of extraction and chromatography, followed by either mass spectrometry. The Center for Disease Control and Prevention (CDC) also initiated a project to standardize hormone measurement. They developed a reference method using high performance liquid chromatography combined with tandem mass spectrometry. It is hoped that achieving standardization for testosterone testing will provide a basis for establishing reliable reference ranges, providing a basis for clinical guidelines.

Next： Review on Estradiol