Monkeypox virus (MPV) is an orthopoxvirus that causes a disease with symptoms similar, but less severe to smallpox. While smallpox was eradicated in 1980, monkeypox continues to occur in countries of central and west Africa. Two distinct clade are identified: the west African clade and the Congo Basin clade, also known as the central African clade. In May 2022, multiple cases of monkeypox were detected in several non-endemic countries, making it urgent to further understand the epidemiology, source of infection and mode of transmission of this disease. 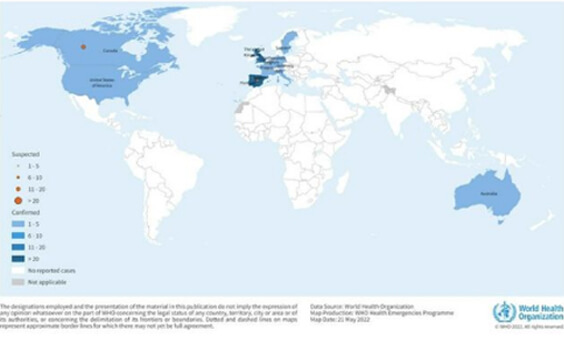 Monkeypox virus (MPV) is a double-stranded DNA virus belonging to orthopoxviruses of the Poxviridae family. It is one of the human orthopoxviruses, including variola (VACV), vaccinia (CPX) and vaccinia (VACV) viruses. Monkeypox virus is about 200-400 nm in size, brick or oval in shape, with stable DNA structure, which can repair itself when mutation occurs.

Monkeypox is a zoonosis: a disease that is transmitted from animals to humans. Cases are often found close to tropical rainforests where there are animals that carry the virus. Evidence of monkeypox virus infection has been found in animals including squirrels, Gambian poached rats, dormice, different species of monkeys and others.

Human-to-human transmission is limited, with the longest documented chain of transmission being 6 generations, meaning that the last person to be infected in this chain was 6 links away from the original sick person. It can be transmitted through contact with bodily fluids, lesions on the skin or on internal mucosal surfaces, such as in the mouth or throat, respiratory droplets and contaminated objects.

The incubation period of monkeypox can range from 5 to 21 days. The febrile stage of illness usually lasts 1 to 3 days with symptoms including fever, intense headache, lymphadenopathy (swelling of the lymph nodes), back pain, myalgia (muscle ache), and an intense asthenia (lack of energy). The febrile stage is followed by the skin eruption stage, lasting for 2 to 4 weeks. Lesions evolve from macules (lesions with a flat base) to papules (raised firm painful lesions) to vesicles (filled with clear fluid) to pustules (filled with pus), followed by scabs or crusts.

The disease is self-limiting, with symptoms usually lasting 2 to 4 weeks and going away without treatment, the proportion of patients who die has varied between 0 and 11% in documented cases. The main difference between the symptoms of smallpox and monkeypox is that monkeypox causes lymph nodes to swell, whereas smallpox does not.

1. What is Lateral flow assay?

The lateral flow assay kit is a chromatographic immunoassay for the qualitative detection of Ag/Ab. The test method is based on antigen-antibody. It has two letters which are test (“T”) line and control (“C”) line on the surface of device. Test line and control line in the result window are not visible before applying any samples. This visual evaluation enables qualitative analysis. This rapid detection card is easy to operate and cost-effective.

A Rapid Chromatographic Immunoassay Kit for Monkeypox Virus-Specific IgG and IgM Antibodies in Human Whole Blood, Serum, or Plasma. During the test, the sample is dropped into the sample well of the reagent, and the chromatography is performed under the capillary effect. The human monkeypox antibody (IgG and IgM) in the sample binds to the colloidal gold-labeled monkeypox antigen, diffuses to the test area, and is captured by coated monkeypox monoclonal antibody II (anti-human IgG and anti-human IgM), forming a complex to aggregate in the test area (test line IgG and test line IgM); the quality control area is coated with goat anti-mouse IgG antibody, which captures the colloidal gold-labeled antibody to form a complex and aggregate in the quality control area. The highly specific antigen-antibody reaction and colloidal gold immunochromatography technology are combined to qualitatively detect the content of IgG and IgM antibodies to monkeypox virus in serum, plasma or whole blood. Test principle: the combination of the analyte with the capture antibody on the membrane and the colloidal gold labeled antibody produces a color change, and the color intensity change has a correlation with the concentration of the analyte.

The fluorescent quantitative PCR instrument can automatically draw a real-time amplification curve based on the detected fluorescent signal, so as to realize the qualitative detection of the monkeypox virus at the nucleic acid level. The multiplex real time PCR detection system includes a pair of primers and probes for internal control (RNase P). The positive control and negative control included in the kit can be used as an external control in every test run. The results of internal and external control can be used to monitor correct specimen collection, handling and real time PCR process.

ELISA is an antigen antibody reaction. It is a plate based assay technique which is used for detecting and quantifying substances such as peptides, proteins, antibodies and hormones. An enzyme conjugated with an antibody reacts with colorless substrate to generate a colored product.

ELISAs are typically performed in 96-well polystyrene plates. The serum is incubated in a well, and each well contains a different serum. A positive control and a negative control would be included among the 96 samples being tested. Antibodies or antigens present in serum are captured by corresponding antigen or antibody coated on to the solid surface. After some time, the plate is washed to remove serum and unbound antibodies or antigens with a series of wash buffer. To detect the bound antibodies or antigens, a secondary antibodies that are attached to an enzyme such as peroxidase or alkaline phosphatase are added to each well. After an incubation period, the unbound secondary antibodies are washed off. When a suitable substrate is added, the enzyme reacts with it to produce a color. This color produced is measurable as a function or quantity of antigens or antibodies present in the given sample. The intensity of color/ optical density is measured at 450nm. The intensity of the color gives an indication of the amount of antigen or antibody.