Estradiol, also called oestradiol, is an estrogen steroid hormone and an important female sex hormone. It is associated with regulating the estrous and menstrual reproductive processes in female. Estradiol help in the development of female sexual attributes, for example, the breasts, hips widening, and a feminine pattern of fat dispersion in females and is vital in the growth and development of female reproductive tissues, for example, the mammary organs, uterus, and vagina during adulthood and pregnancy [1].

Estradiol is actually an estrane steroid also called 17β-estradiol (to differentiate it from 17α-estradiol) or as estra-1, 3, 5(10) - triene-3,17β-diol. It has two hydroxyl groups, one at the C3 position and the other at the 17β position, and in addition three double bonds in the A ring. Because of its two hydroxyl bondings, estradiol is commonly called E2 [1].

1. It is responsible for regulating the estrous and menstrual reproductive cycles in females.

2. Estradiol helps in the female secondary reproductive organs, such as the breasts, hips widening, and a feminine pattern of fat distribution in females, and is necessary for the female reproductive tissues development and its maintenance, for example, the mammary organs, uterus, and vagina in puberty, adulthood, and pregnancy [2].

4. Estradiol also affects the liver. It influences the development of various proteins, including lipoproteins, restricting proteins, and proteins responsible for blood clotting [3, 4]. 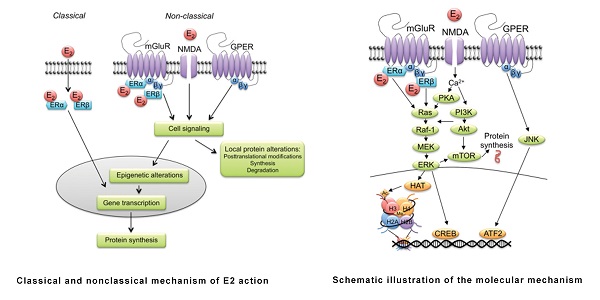 Estrone is an important and weak type of mammalian estrogen and the only estrogen found in females after the menopause. Limited amount of estrone are available in various tissues of the body, mostly fat and muscle. Estrone as well as some other estrogens, are integrated from cholesterol and emitted mostly from the gonads, however they can also be developed from adrenalandrogens in fat tissue.

Estrogen, any of a group of hormones that essentially affects the female reproductive tract in its development, maturing process, and function. There are three important hormones estradiol, estrone, and estriol among the estrogens, and estradiol is the predominant one.

This is one of the weakest estrogens and is a waste product made after the body utilizes estradiol. Pregnancy is the main stage at which large amount of estriol are produced. They are unable to be converted into estradiol or estrone.

Estradiol is responsible for over 400 functions in the human body. In men, the hormone inhibits growth of cells in the prostate gland. In women, estradiol replaces deficient natural levels of estrogen in the body. Estradiol slows the breakdown of bones and is prescribed to women thatdo not produce estradiol.

Initally Doisy work at St. Louis University started with the investigation of the estrous cycle in mice. He found that ovarian follicles procede the apperarance of cornified cells in the vagina. He demonstrated that extracts from sow ovaries, when injected into ovarectomized mice, cornified cells were produced in the vagina. He extracted female’s sex hormones, estrone (Theelin) and estriol (Theelol), from many gallons of human pregnancy urine [5].

There are plenty of methods to detect Estradiol, such as IMX, Amerlite, Spectria(update), Vidas, In house RIA and so on.

In this study about 12 infertile females were included with various age classes. Seven females with PCO were assessed in group one with infertility due to ovulatory malfunctions. They got human menopausal gonadotropin (hMG) containing 75 IU FSH and 75 1U LH for each ampoule every day (1-2 ampoules/day, depending upon the the follicular response) until the day before the induction of ovulation. The second group (patients 8-12) comprised of five supcrovulatcd cycles induced for in vitro fertilization (1VF). Clomiphene citrate (CC; Pergotime, Serono. Switzerland) was managed for 5 days starting on the second day of the menstrual cycle, and varying doeses of hMG were given every day from the sixth day until induction of ovulation. Infertility of tubal origin are indications for 1VF.

All cycles were observed on daily basis by trans-vaginal ultrasound and serum E2 early in the day from day 10 until ovulation induction. When the main follicle (s) achieved an average diameter of atleast 17 mm. The blood samples for E2 determination were collected in between 7.30 and 9.30 a.m. while the ultrasound examination and centrifuged within 2 h of collection. Serum E2 levels were generally determined on the same day. Serum concentrations of E2 were estimated with our direct RIA and five direct commercial assays [6].

Commercially various kits are available for the direct measurements of E2 in serum. These assays are quite simple and fast, and the manufacturers have presented an acceptable performance characteristics. However, some problems may arise with some direct assays which are possibly caused by the differences in calibration, the association of E2 with binding proteins, and/or the presence of interfering substances in samples. Large differences between methods are found [6] and this also contributes to the confusion about the interpretation of E2 results. Thus, when hormone analyses are used, appropriate reference intervals are a prerequisite for correct diagnostic deductions [7, 8].

In some researches, comparison between three indirect and two direct assay techniques and gas chromatography-tandem was conducted where 40 postmenopausal female endogenous E2 measurements were taken. Besides, another study was conducted for confirmation where a direct and an indirect assay, to the GC-MS/MS were compared. In this study 374 postmenopausal women not taking hormone treatment from the low dose transdermal estrogen assessment (ULTRA) trial. In the pilot study, E2 by three indirect assays correlated better (P < 0.03) with GC-MS/MS and with BMI than estimations by four direct methods. From these results, it was reasoned that mass spectrometry is more down to earth for a wide utilize while the extraction based roundabout technique assays are much better for measuring low postmenopausal serum E2 [9].

4. Levels of Estradiol In children

E2 assays can't accurately measure with sound precision E2 less than 30 pg/mL. In mature females from day1 of the menstrual cycle is related with an E2 of more than 60 pg/mL estimated by RIA after extraction and chromatography. In contrast, E2 levels in the early follicular stage (d 1– 5) of the menstrual cycle, utilizing a mass spectroscopy-based test, were 68.1 or more less 18.6 pg/mL.

It means that until 2.03 years, E2 levels did not drops down before the final menstrual period, using a sensitive immunoassay with a lower limit of detection of 1 pg/mL. In contrast, most commercial E2 assays cannot accurately measure E2 levels in postmenopausal women (20 pg/mL) [10].

Next： Review on Sex Hormones