Risk Factors and Treatment of Depression

Depression, in psychology, is a mood or emotional state marked by feelings of low self-worth or guilt and a reduced ability to enjoy life. A person who is depressed usually experiences several of the following symptoms: feelings of sadness, hopelessness, or pessimism; lowered self-esteem and heightened self-depreciation; a decrease or loss of ability to take pleasure in ordinary activities; reduced energy and vitality; slowness of thought or action; loss of appetite; and disturbed sleep or insomnia [1].

Depression symptoms can vary from mild to severe and can include:

1. Feeling sad or having a depressed mood

2. Loss of interest or pleasure in activities once enjoyed

3. Changes in appetite, weight loss or gain unrelated to dieting

4. Trouble sleeping or sleeping too much

5. Loss of energy or increased fatigue

6. Increase in purposeless physical activity (e.g., hand-wringing or pacing) or slowed movements and speech (actions observable by others)

Depression can affect anyone，even a person who appears to live in relatively ideal circumstances.

Several factors can play a role in depression:

1. Biochemistry: Differences in certain chemicals in the brain may contribute to symptoms of depression.

2. Genetics: Depression can run in families. For example, if one identical twin has depression, the other has a 70 percent chance of having the illness sometime in life.

3. Personality: People with low self-esteem, who are easily overwhelmed by stress, or who are generally pessimistic appear to be more likely to experience depression. 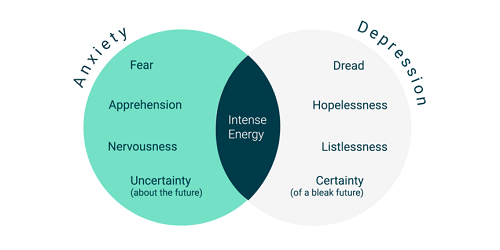 As the diagram below indicates, the most pronounced commonality between anxiety and depression, at least in terms of emotion, is a feeling of intense energy that is very consuming and hard to shake off.

There are three groups of drugs most likely to be used for depression:

Because of its controversial past many people feel the need to think carefully before having ECT or allowing it to be given to relatives. Clinicians at the Institute firmly believe that ECT has a small but important role in treatment, particularly in cases of:

2) severe melancholic depression where there is a high risk of suicide or the patient is too ill to eat, drink or take medications． 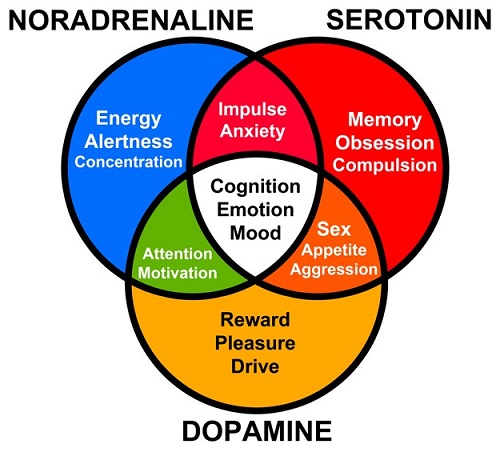 In people with depression, the levels of certain brain chemicals are thought to be out of balance, particularly the neurotransmitters serotonin, dopamine, and norepinephrine.

There are a wide range of psychological treatments for depression. The main ones include:

The role of serotonin in normal and depressed people with or without SSRIs treatment.

Trials are looking at the effects of botulinum toxins on depression. The idea is that the drug is used to make the person look less frowning and that this stops the negative facial feedback from the face. In 2015 results showed, however, that the partly positive effects that had been observed until then could have been due to placebo effects [5].

MRI scans of patients with depression have revealed a number of differences in brain structure compared to those who are not depressed. Meta-analyses of neuroimaging studies in major depression reported that, compared to controls, depressed patients had increased volume of the lateral ventricles and adrenal gland and smaller volumes of the basal ganglia, thalamus, hippocampus, and frontal lobe (including the orbitofrontal cortex and gyrus rectus) [6]. Hyperintensities have been associated with patients with a late age of onset, and have led to the development of the theory of vascular depression [7].

5. Milev, R. (2015). Response of depression to botulinum toxin treatment: agitation as a predictor. Frontiers in psychiatry, 6, 55.

Next： Clinical Biochemistry Characteristics of COVID-19