Scientists are racing to learn the secrets of severe acute respiratory syndrome–coronavirus 2 (SARS-CoV-2), which is the cause of the pandemic disease COVID-19. The first step in viral entry is the binding of the viral trimeric spike protein to the human receptor angiotensin-converting enzyme 2 (ACE2). 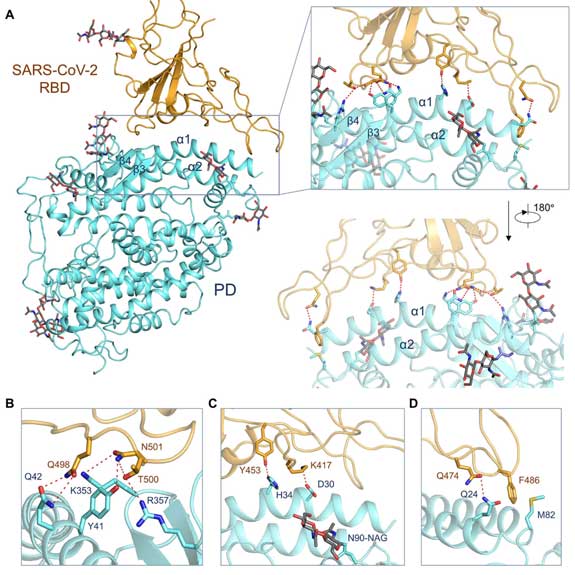 Interactions between SARS-CoV-2-RBD and ACE2 [6]. (A) The PD of ACE2 mainly engages the α1 helix in the recognition of the RBD. The α2 helix and the linker between β3 and β4 also contribute to the interaction. Only one RBD-ACE2 is shown. (B to D) Detailed analysis of the interface between SARS-CoV-2-RBD and ACE2. Polar interactions are indicated by red dashed lines. NAG, N-acetylglucosamine.

In the case of SARS-CoV, the spike glycoprotein (S protein) on the virion surface mediates receptor recognition and membrane fusion. During viral infection, the trimeric S protein is cleaved into S1 and S2 subunits, and S1 subunits are released in the transition to the postfusion conformation[1]. S1 contains the receptor binding domain (RBD), which directly binds to the peptidase domain (PD) of angiotensin-converting enzyme 2 (ACE2)[2], whereas S2 is responsible for membrane fusion. When S1 binds to the host receptor ACE2, another cleavage site on S2 is exposed and is cleaved by host proteases, a process that is critical for viral infection[3]. The S protein of SARS-CoV-2 may also exploit ACE2 for host infection[4]. A recent publication reported the structure of the S protein of SARS-CoV-2 and showed that the ectodomain of the SARS-CoV-2 S protein binds to the PD of ACE2 with a dissociation constant (Kd) of ~15 nM[5].

Although ACE2 is hijacked by some coronaviruses, its primary physiological role is in the maturation of angiotensin (Ang), a peptide hormone that controls vasoconstriction and blood pressure. ACE2 is a type I membrane protein expressed in lungs, heart, kidneys, and intestine[7]. ACE2 also functions as the chaperone for membrane trafficking of the amino acid transporter B0AT1, also known as SLC6A19[8], which mediates uptake of neutral amino acids into intestinal cells in a sodium-dependent manner.

Cleavage of the C-terminal segment, especially residues 697 to 716 (fig. S4), of ACE2 by proteases, such as transmembrane protease serine 2 (TMPRSS2), enhances the S protein–driven viral entry[9]. Residues 697 to 716 form the third and fourth helices in the neck domain and map to the dimeric interface of ACE2. The presence of B0AT1 may block the access of TMPRSS2 to the cutting site on ACE2. The expression distribution of ACE2 is broader than that of B0AT1. In addition to kidneys and intestine, where B0AT1 is mainly expressed, ACE2 is also expressed in lungs and heart[10]. It remains to be tested whether B0AT1 can suppress SARS-CoV-2 infection by blocking ACE2 cleavage. Enteric infections have been reported for SARS-CoV, and possibly also for SARS-CoV-2[11]. B0AT1 has also been shown to interact with another coronavirus receptor, aminopeptidase N (APN or CD13)[12]. These findings suggest that B0AT1 may play a regulatory role for the enteric infections of some coronaviruses.